Here you will find which are the best shopping centers in New York and New Jersey, what makes them special, where you can find your favorite clothing brands, the best restaurants, entertainment options, and more.

There is no other city like New York. You can do everything in this great city and its surroundings. Of course, shopping is one of the favorite activities of the locals and the millions of tourists who visit this city every year. If you are a fan of the Malls, in New York and New Jersey you will find dozens of options with all kinds of stores. We have prepared a selection of the best shopping centers in New York, both premium and luxury stores as well as fast fashion brands and great entertainment venues and restaurants.

The Shops at Hudson Yards 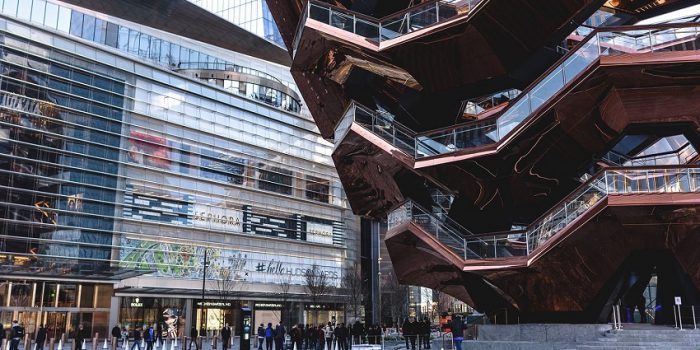 Located just minutes from Madison Square Garden, the world’s most famous entertainment venue in The Shops at Hudson Yards, one of the best shopping centers in New York. Opened in 2019 in the Manhattan area, The Shops at Hudson Yards is part of the complex of buildings of the same name and is the most exclusive shopping center in the city. Outside the mall is The Vessel, a maze of stairs that you can climb and admire the incredible views of the city from there. There is also the EDGE viewpoint, The Shed with music and live shows, and CAMP, a concept with interactive games for children.

Among the stores, you can visit at The Shops at Hudson Yards are the luxury brands Dior, Kenzo, and Fendi as well as other famous fashion brands such as Banana Republic, H&M, and Jo Malone. Other options include The Conservatory multi-brand stores and the b8ta gift and electronics store (a must-see). There is also Uniqlo, the Australian brand of women’s clothing Scanlan Theodore or the gift shops Beyond The Edge and PIQ. Its restaurants include Mercado Little Spain, by the famous Spanish chef José Andrés, a concept of a mini-market with three options of Spanish food inside.

Westfield World Trade Center is an underground shopping center built under the ONE World Trade Center. It is one of the most famous malls in New York since it is in what were the facilities of the original shopping center that was destroyed under the Twin Towers. It opened in 2016 and is a good place to shop or eat if visiting the 9/11 memorial. From here you can go up to the One World Observatory, the viewpoint from the top of the tower with an elevator that passes 100 floors in 40 seconds.

Here you can find stores such as Dior, Kate Spade, Lacoste, as well as the premium H&M brands: COS and & Other Stories or the sports brand Under Armor. There is also a branch of the Apple Store and the Spanish jewelry Tous. You have good options for lunch or dinner at Eataly (a large market with food stores and restaurants specializing in Italian food), hamburgers at Shake Shack or the culinary Gansevoor Market with food from around the world.

The Shops at Columbus Circle

The Shops at Columbus Circle, very close to Central Park, is another good option for shopping in New York. Located in the Time Warner Center, it is one of the best-designed malls in New York, which is well worth visiting as its location is also excellent. It includes stores such as Jo Malone, H&M, Hugo Boss, and the French perfumery Diptyque. In addition, there is the Michael Kors store, the flagship store of the Williams Sonoma food and cooking accessories store, and a branch of the Whole Foods supermarket.

You can also visit the Amazon bookstore in this New York shopping center, one of the e-commerce giant’s physical stores where you can buy their best-valued books. Their selection of restaurants is one of the best in New York including two 3-star Michelin restaurants: MASA and Per Se. They are expensive, but it is an experience that you will not forget.

A great place to shop if you are looking for exclusive brands is Brookfield Place. This site, located near the One World Trade Center and the Westfield WTC shopping center, has in its premises boutiques of several luxury brands. Among these, the Italian brands Bottega Veneta, Gucci, and the French firm Louis Vuitton stand out. There are also brands such as Theory, the Allen Edmonds shoe brand as well as the Monica + Andy clothing brand for babies and children, which has become one of the favorites of celebrities to dress their children.

But it is also one of the shopping centers in New York with better restaurants including Le District, PJ Clarke’s, the Italian Sant Ambroeus, or if you prefer seafood you can go to Seamore’s. Here is the North Cove Marina from where you can take tours of the Hudson River or just see the beautiful view.

If you are in the Queens area and want to go shopping, the best place in Queens Center, another of the best shopping centers in New York. This mall is famous since at Christmas time it opens 24 hours a day and is one of the most popular in New York. There are many interesting stores such as the English brand Superdry, the official Apple stores, as well as other good clothing stores including Michael Kors, H&M, or the Sephora makeup store.

There are also branches of the famous Macy’s and JCPenney department stores. Nearby is the Queens Place Mall which has the Target supermarket, as well as Best Buy, the famous DSW discount shoe store, and the Red Lobster and Outback Steakhouse restaurants.

The Westchester is a premium shopping center in the White Plains area, a 45-minute drive from Manhattan, and one of the most expensive in the state. It is considered by many as one of the best shopping centers in New York located in its metropolitan area due to its wide variety of brands. It was built in 1995 and renovated in 2016, it has a classic but elegant design.

This three-story mall features Neiman Marcus and Nordstrom luxury department stores as main or anchor stores. In Westchester, there are several luxury stores such as Louis Vuitton, Gucci, and Burberry as well as other fashion brands including Free People, Weekend MaxMara, the sports brand Lululemon and The North Face. It has a food court known as Savor Food Hall that has several restaurants including The Little Beet, Shake Shack, or Melt Shop.

Located north of NYC, Palisades Center is one of the largest shopping centers in New York and is also in the top 10 of the largest in the United States. There are more than 100 stores such as Zara, Best Buy electronics store, Barnes & Noble bookstore, Old Navy, or Adidas. You can also shop at the Burlington Outlet Store, where you can get clothes and accessories at a great price. You can also visit the Disney Store, GAP, and Vans.

Within this large shopping center in New York, there are many entertainment options so in addition to shopping you can have fun with your family or friends. There are bowling alleys, an escape room, climbing walls, and an attraction where you can simulate with your family and friends that you are in a television game show. You should take into account that it is about 45 minutes by car from Manhattan, but it is still a great shopping option in New York.

You may also be interested in PREPARATION FOR AMERICAN LIFE